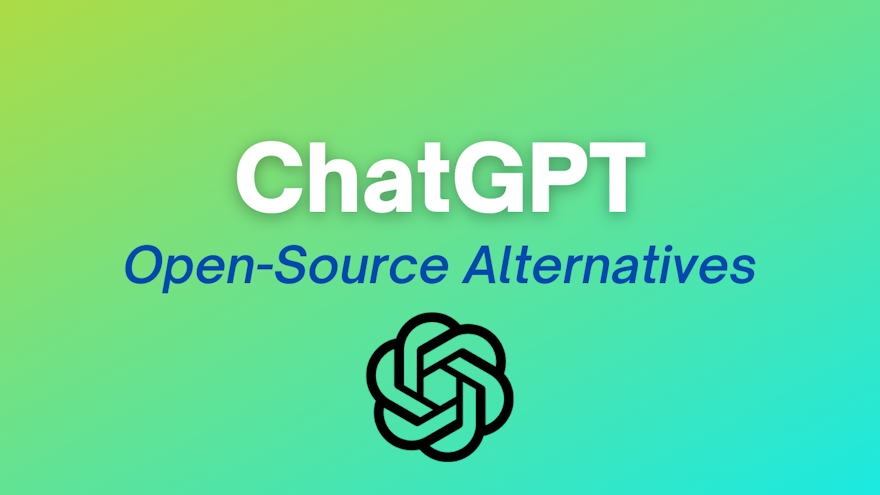 It's no secret that ChatGPT has taken the world by storm. OpenAI's chatbot model has busted through the AI community into mainstream so fast that your aunt is already talking about ChatGPT at family dinner.

Rumor on the street is that OpenAI is preparing to launch a premium version of ChatGPT in the range of $42 /month. We'll see if that actually happens, but regardless it may be worthwhile to explore open-source chatbot model alternatives.

If you are building a product on top of ChatGPT, you need to be aware that since the model is not open-source (meaning you do not have access to modify or view the source code), you run an existential risk of OpenAI making changes or decisions to ChatGPT that could obliterate your product and turn your world upside-down in a matter of moments.

This is why you want to keep an eye on open-source alternative models that can achieve a similar result to ChatGPT. In the case of a "black swan" event (like OpenAI locking you out of ChatGPT), you could have a Plan B open-source model solution ready to integrate into your product in a moment's notice.

Another popular reason to use open-source models is because you have full control over the source code which can give you an edge up against competitors if you are able to modify or train the model to your specific use case(s) to outperform a generic model like ChatGPT.

We spoke to one of Banana's lead ML engineers and asked him what models he would use if he had to build an open-source ChatGPT alternative that could compete with ChatGPT performance. Here is what he said:

ChatGPT has two essential functionalities: the chatbot function and the “instruction following” (you tell it what to do and the model does it, instead of the model completing your sentences).

Perfect! That was easy. Now that we know what models we need to work with to build an open-source ChatGPT alternative, let's take a quick look at each model and then see how we can deploy the models.

Developed by Google AI, the best part about FLAN-T5 is it's ability to explain and provide reasoning for the answers it provides. It can actually share details of how it arrived at the answer it gave. Jump over to our FLAN-T5 deployment tutorial if you want to learn more about it's unique use cases and why it is gaining popularity in the open-source community. We go into detail there (no sense repeating)!

Blenderbot is an open-source chatbot model developed by Meta's AI team. You can read more about Blenderbot 3B in its HuggingFace model card, but they claim that "human evaluations shows our best models are superior to existing approaches in multi-turn dialogue in terms of engagingness and humanness measurements."

DialoGPT is a chatbot model similar in functionality to Blenderbot 3B. Each have their own unique pros and cons - you should play around with both to see what suits your use case. As mentioned in the HuggingFace model card, DialoGPT is a pretrained dialogue response generation model for multiturn conversations. DialoGPT has been tested for its quality of responses and has scored comparable to human-level response quality. The model was trained on conversations within Reddit threads...so we can imagine it's pretty sassy with responses.

How to Deploy ChatGPT Alternative Models

As mentioned above, we have a really quick and easy tutorial that takes you step-by-step to deploy FLAN-T5 on Banana's serverless platform.

We have a tutorial coming out shortly for this, but for now you can use this Banana-compatible repository that is setup to deploy Blenderbot 3B on our serverless GPU platform.

Tutorial coming soon for DialoGPT! In the meantime you can use this Banana-compatible repository to deploy DialoGPT on Banana's serverless GPU platform.