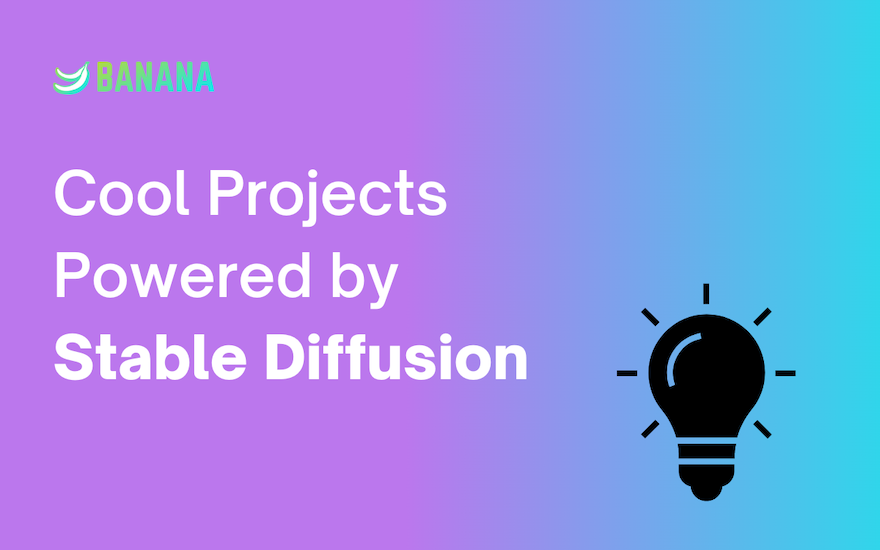 Stable Diffusion in some ways is an open source alternative and competitor to OpenAI's DALL E 2 model, which has prompted a natural debate over quality and capability comparisons between the two models.

However, we're not interested in debating that kind of thing in this article.

P.S. - If you have built a project with Stable Diffusion not included on this list, tag @BananaDev_ on Twitter and we'll add it to this article.

We love this project built by Sharif Sameen. Lexica.art is a search engine for Stable Diffusion generated images and prompts. The website boasts over 5M+ images with prompts for you to reference. If you are trying to understand what prompts to input with Stable Diffusion to improve the quality or style of imagery being generated, this website is the best resource we know of to get inspiration to improve the quality of your prompting.

Introducing Lexica – a search engine for AI-generated images and prompts.

Every image has a prompt and seed, so you can copy and remix anything for yourself.

Hopefully this makes Stable Diffusion prompting a bit less of a dark art and more of a science!https://t.co/0YdmzHqqY0

This project was created by John Dagdelen, and this use case of Stable Diffusion provides clear value for users immediately. It's a stock photo website, but the twist being that every image shown on the website was uniquely generated by AI.

It offers both a free and paid user tier, with the primary difference between the two tiers being that the free tier allows you to search through the already-generated image library and utilize those stock photos, and the paid tier (good deal @ $5/month) enables you to generate your own stock imagery based on your prompts and unique needs.

When you search it uses ML to find images that are visually similar and gives you the option to generate more images from your prompt.

Being built by Antonio Cao, this project is still under development and not currently released yet. Ando is a plugin native to Figma that creates a realistic depiction of your sketch.

The demo video takes a basic sketch of a shoe, jumps into the Ando plugin where they described the vision of what this shoe will look like with prompts, and then produces a high-quality rendering of what you described. It allows you to generate multiple versions of renderings to hone in on what your vision of the project truly is.

Built by William Buchwalter, this project is still in private beta. Alpaca brings image generation technology into Photoshop as a plugin. Similar to the vision of Ando for Figma, you can generate images based on prompts you provide. These images are dropped into the Photoshop canvas, and the cool thing about this is you can now manipulate the image within the context and features of Photoshop on your canvas.

In the demo video you can see multiple Stable Diffusion-generated images being placed on a Photoshop canvas creating a scene, but with human powered graphic design work being developed into the canvas as well to create an integrated scene built by AI + humans. Really neat!

* Of which I've got about 0 as can be seen below. pic.twitter.com/3L1vteAEKA

Being mindful of copyright infringement, you could build a tool that takes pre-existing written books and turn those into colourful, visual storybooks.

Rather than turning already written novels into visual storybooks, you could write your own story-arch and turn it into a visual novel that is unique and designed by AI. You could have multiple storylines and series' of visual novels that take readers into different worlds and stories.

Create Your Own Trading Cards Collection

Design your own trading card collection generated by Stable Diffusion and create a card-universe that can be collected, traded, and turned into a card game.

Turn your vision of an NFT collection and community into reality. Design the NFTs with Stable Diffusion.

By using Stable Diffusion's prompts in a standalone app (or one of the plugins mentioned above), you could enable customers to generate their own custom clothing based on text prompts and then connect them to a clothing print company to get the clothes launched.